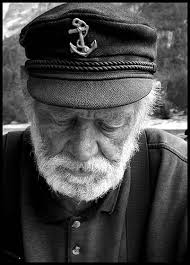 He was scared and I was sorry for having to draw blood a second time. He was a sailor, an alcoholic; a dry docked man too old to sail with a son cemented on the shore. His liver was crying for a break and he cried out when I stuck him a second time. He pleaded, “Don’t stab me again.” The Medic nodded at me to stick him until the blood was milked good to sample his blood sugar.

On the rig he was sweaty and grey. His heart rate started to crash and the medic asked me, “Josef, could you please undo the patient’s shirt.” We pulled the rig off to the side of the road. He was dying, or at least it looked like it. It felt like it. I stopped breathing and then I did breath and I became loose and open. We double-checked his patches, I swabbed his arm, and the medic gave him something magic, his BP cartwheeled then jumped back up, like an impossible acrobatic trip up a flight of stairs.

I put a blanket around him and we continued for the VA. He had been in the navy. “That’s where I learned to love the sea,” he said. “I’ve passed through the Panama canal more times than my son has come down from Alaska to visit me,” he said. “Four times,” he said.

His son was in his dad’s living room when we had arrived on scene. He looked scared. The old man was worried that his son would never come back again because he got sick. “I’m weak and old,” he said. “I think you’re brave, sir,” I said. “No, I’m old and scared of everything,” he said. I didn’t know what to say to that, but I kept him talking until we arrived to the ER.